We drove seaward to the hardly mentioned port city of Antofagasta. This town, trapped like a fly in between the Pacific Ocean and the vast northern desert of Atacama, was described by our guidebook in such a way that made it seem as if it had no business existing at all. It had no notable tourist draws and the most exciting place to go was the mall near the town center. In spite of all this, our unforgettable and unimaginable stay in Antofagasta festered on for eight long days. We found the other side of Antofagasta.

Having arrived to Antofagasta on a Saturday, we knew we’d have to wait out the weekend to begin the series of surgeries Velita required to truck onwards. So, we connected with some Chilean friends we’d met while eating our peanut butter lunches on Machu Picchu.

Nancy invited us to her house, where we met Fernando and their son, Fernando Jr., aka Neymar, as well as Nancy’s older son, Daniel. Nancy’s friends Nathy and Alejandra soon showed up to complete the crew that would hang together for the rest of the week.

On Sunday afternoon Ale invited us to her house for an asado (BBQ) with her entire family, where we indulged in the incredible grille-to-mouth concept of eating steak. We washed down this desperately needed protein rich meal with the fruitful flavors of Chilean wine. As hard as it was to communicate with the family in their notoriously distinct Chilean brand of Spanish, we made it work well enough to erupt some laughter and enjoy ourselves thoroughly.

On Monday morning we hobbled up to Luis’s workshop in the middle of the city, our car in worse shape than maybe even our late Santa Maria ever was.

Despite the catastrophe we dropped off on his doorstep, Luis greeted us with his permanent smile and a deep commitment to fight this battle alongside us. In truth, Luis took the role as battalion commander and we his between-the-trenches foot soldiers. First thing’s first, he waved us inside and offered us a place to stay in his personal camper van at the back of the workshop. We were to stay as long as it took to recuperate Velita. Just beware of the killer spiders.

Over the course of the week ahead, we visited one specialty mechanic after another, recommended to us by Luis and informed by his many years in this line of work in Antofagasta. First, our completely collapsed suspension, and later the warn-out brakes. In between, Luis himself patched up a plethora of minor illnesses, from the jammed 4×4 locks to the unreliable gas line to the engine. Along the way, Luis insisted we actually learn a bit about our car’s breakdowns. He used his white board to draw out simplified demonstrations of the problems, some of which we may have kind of conceptualized, but admitted it wouldn’t be a bad idea to take an auto mechanic 101 course when we get home. We’d think about it, on Luis’s suggestion, we promised.

In the evenings, we’d go kick it with our Anto crew, heading to the casino to spend some of Alex’s friends money, grabbing a drink at downtown bars, or catching a couple Hollywood hits at the cine. Their kindness to us was unending. Aside from Ale’s family asado, Nathy had her sister make us an unbelievable chocolate cheesecake, while Fernando and Nancy had us over for one meal after another, sparing us from the inevitability of either peanut butter sandwiches or empanadas.

On day number 8 in Antofagasta, just after we’d installed new shock absorbers to Velita’s back tires (that’s right, we know what those are now!), Luis had some wild ideas up his sleeve to send us south with a bang.

We invited Nancy and Daniel to join the fun, but in reality we had absolutely no clue what “sand duning” really was.

Along with Luis and his son, Luis Jr., Velita packed 7 deep and we cruised north of the city to take on something that a week ago would have been entirely impossible in Velita’s condition. But now, with the car in a completely renovated state, anything was possible, Luis aimed to prove to us.

Luis took over the driver’s seat and unleashed Velita’s full capabilities upon the inhospitable tracks (or lackthereof) of the sand desert. Simply by deflating the tires our car morphed into an off-road rock star. She danced up and down sliding sand dunes, twirling and twisting, gliding and glistening, showing off precision deserving of a ball-room-dancing “10 score.”

As terrific as it was, it was entirely terrifying. Luis, this mild-mannered mechanic, underwent a transformation of his own as drastic as that of Velita’s. Behind the wheel, he became a madman. He dared to dive Velita off of dunes with deep drops, which worked to wrestle our queasy stomachs out from our guts and into the dried Atacama air. We screamed with newfound fright. This roller coaster had flown off its tracks.

Velita’s weeklong operation was a smashing success and we were antsy to move on southward. We said goodbye to our new Antofagastan friends, attempted to express our gratitude as much as we could, and drifted down into Chile’s empty dry desert on Ruta 5.

The long hiatus in Antofagasta set us back a cool week, but the silver lining shined brightly above us that night. When we left Uyuni about two weeks prior, we’d dreamed of a night under Atacama’s astrological arena. But our poor timing under the full moon’s force promised a washout of the world famous stars. Fortunately, eight days of waiting gave the man on the moon enough time to phase out and turn its dark side toward us and Atacama. Just two days shy of a new moon, the galactic center of the universe shimmered majestically over our uncovered tent, presenting a flash of the universe past that we’d so long lusted over. Like fifteen year old kids smoking their first joint and turning up Abbey Road in their parent’s cul-de-sac, the sky surrendered itself to us, giving new meaning to life and our place here on this planet, if but for the briefest flash of time.

When we pulled into Valparaiso, Chile’s intellectual and artistic cosmopolitan center, a blatant reality surfaced: we’d failed to plan. With months and months of travel in our back pocket, having time and again been shaken into learning from our mistakes, it’s amazing how situations like this persist. What would we do in Valpo? It had been on our sketch of an itinerary, which was basically written on the back of a napkin over a year before, but the blankness of what to do in this well-renowned city stared back at us.

Over the course of our two days and one night there, we sauntered up and down popular streets, visited Pablo Neruda’s home-turned-museum overlooking the city, and then joined up with the city’s free walking tour. The city was charming and captivating, but appeared better served as a site to settle down for an expat to live for several weeks or months rather than a place to pass through in a day. We appreciated Valpo for what it was, but resigned ourselves to the fact that it was more of a misfit stopping point in our adventure-based trans-continental journey.

Our weekend visit to Chile’s capital was equally uneventful, at least on the front end. We stayed at a hostel, partied through the night, and drove vaguely in circles around the bustling, New York-like city. On Saturday night, we were spoiled by our friend Jeremy, who’d traveled with us for two weeks between Colombia and Ecuador, to a night of leisure at the W Hotel. This type of luxury is never wasted on us, so we relished the relaxation. Lounging in robes, we ignored the mountain of filth-covered bags we left on the hotel room floor. An unreal shower was followed by a night sleeping in cloud-quality comfort. Tomorrow we’d continue the vagabond lifestyle. But not until tomorrow.

It should have been us thanking Pilar and Micaela, not the other way around. Backwards, twisted and unreciprocated. By now, we’d come to terms with this pervasive logic that underscored our interactions with locals from Mexico to Chile. So, when we invited them out to lunch to thank them for heroically hauling us out of that hellish mud hole on Ruta de Las Lagunas, we were unsurprised by their insistence to instead have us over for a Sunday family asado.

We jumped right into the giant family gathering and greeted everyone excitedly. Brothers and sisters, cousins, aunts and uncles, grandparents. Here in Chile, it was typical for the entire extended family to come together for this weekly celebration. What was atypical was for three overgrown gringos to crash the party. Yet regardless of how unusual our presence may have felt, you wouldn’t notice anything out of the ordinary by the way the family treated us.

Pilar insisted we get fed quickly and heartily. Steak, chicken, meat-filled empanadas. It was protein day for us and we’d make up for lost time. After filling up, we chatted about potential routes south to Patagonia and listened carefully to absorb the highly informed recommendations of people who could fill in the enormous gaps of our plans between Santiago and the end of the world.

We played a little football toss with Pilar’s husband Gonzalo (American football, that is!), took a dip in their pool, and even enjoyed a tour around the property shared amongst the whole extended fam.

When the sun set over Santiago, which we witnessed from the family’s phenomenal view perched above the city, we popped the rather pathetic bottle of wine we’d brought as a gift and continued sharing stories of our travels. We tried to impress Mica and her siblings with our limited, yet enthusiastic passion for reggaeton, but apparently the beloved| Latino pop music had lost its popularity this far down the spine of South America.

Pilar understood our daily predicament to sleep on the cheap and happily had us bunk up in her living room. Without knowing us save for one passing experience together, she’d taken us in as part of the family, if just for a day.

An informed and objective traveler would recommend to you San Pedro de Atacama as your adventure hub in the north of the country, a launching pad for all sorts of activities and natural sights, while naming Valparaiso as your cosmopolitan hot spot, the colorful town where you can best get to know Chile’s culture and its people. This same objective traveler wouldn’t have much to say at all about Antofagasta and might consider Santiago more of a city lacking in personality. But we are about as unbiased as travelers get and instead use a different type of criteria for naming our favorite places along our travels. It’s what landed us in En Transito for a month unlike any other, Palmares for a wacky week with the Rodriguezes, and Bogota for a memorable month.

Our first sojourn in Chile reminded us of this theme intrinsic to our travels. It’s the people, not the places on their own, that make traveling special. In this chapter of our trip, our nonobjective perspective left us with a far greater connection to Antofagasta and Santiago, where great friends fill our memories and refilled our sense of gratitude. 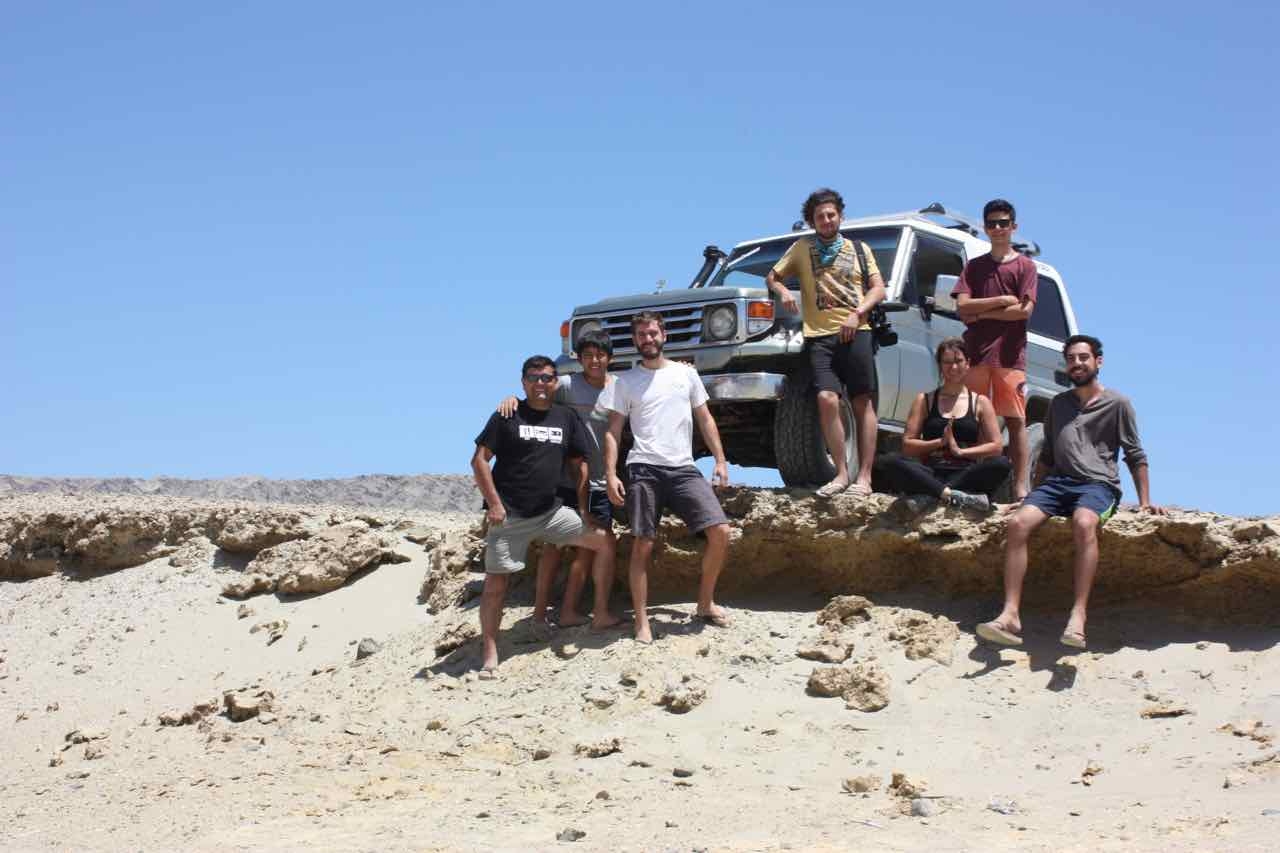