One week down, one week to go until launch! Thank you to everyone who has donated! We have now raised over $6,500! All further donations will benefit the Well Dunn Foundation. You can donate at www.igg.me/at/globalgoulets. Please do so. It’s the way of the Goulet!

Over the past week, we have been exploring the UK, covering over 750 miles of British roadway in our beautiful purple car. In that time we’ve been to Crawley, Rugby, Oxford, Stonehenge, Bath, Canterbury and now London.

It started in Crawley on the night of July 5th, when Alex and Brian met three local Brits who decided to take us clubbing. After a windy drive in the trunk of a van, we made it to a club that not only played music, but also sold Domino’s pizza. Turns out everyone loves drunk Domino’s.

The following morning, we took a drive up to a farm in West Sussex to meet the Auto Goulet, our purple, 2-door, 1998, AC-less Nissan Micra. Boy is she a beaut. It was truly love at first sight. After having some trouble figuring out how to turn the car on, we did a few laps around the farm. Having only stalled every other start, the man we purchased the car from figured we were good enough to drive on British roads. And so we took off back to Crawley, driving on the left side of the road, from the right side of the car, with a stick shift… Alex  only stalled once every 2 minutes, an improvement from every 15 seconds on the day he learned back in the US.

After nearly running out of gas, Alex spent time imparting his in-depth knowledge of driving stick shift to Brian. Driving around a parking lot, Brian learned how to get into first gear, and then do some major shifts up to second or third gear. He even threw in a reverse or two. It was beautiful. Average stall of every 30 seconds, twice as good as Alex on his first day!

From there we drove about 200 miles to Rugby, where we took a survival course from everything on how to bribe border guards to how to change a tire! Quite an eventful day. We also got to play with AK-47s.

With a taste of the kinds of things the UK could teach us, we decide to continue our education at Oxford. At this brilliant university we learned about science, history, and how to eat scones with clotted cream. Bloody brilliant if I do say so old chap!

Having absorbed and digested more than we learned at our jobs in the past three years, we drove back to London to pick up Eric, former teacher (to follow the theme) from Heathrow. Giving him only moments to adjust to the British air, the three of us drove off to Stonehenge where we marveled at some rocks. Although we received top marks at the esteemed Washington University in St. Louis and now Oxford, we could not deduce the meaning of Stonehenge. We did of course have time to film some mature poses. 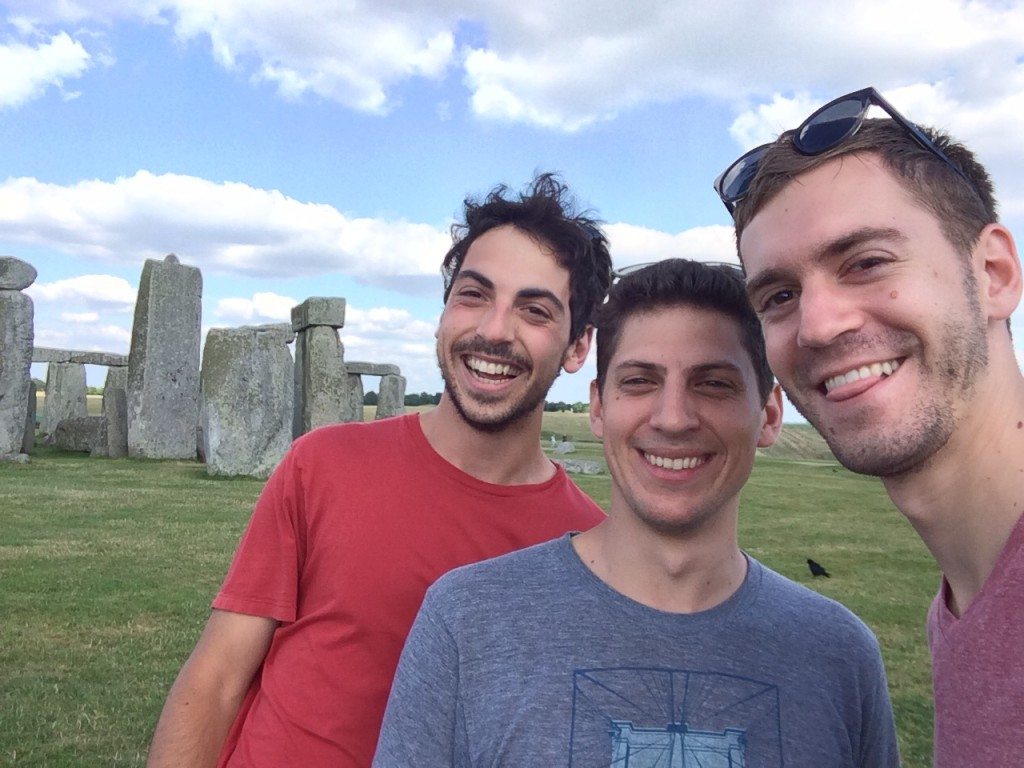 Stonehenge gave way to Bath, a gorgeous city built into a hill and founded by the Romans in the 1st century. Here we participated in a “lock in,” which is when the owners of a bar invite you to hang out and continue drinking after the bar “officially” closes down. We hung out with our new British friends until around 5am, after which we stumbled back to our hostel. Alex woke up on the floor of said hostel in his underpants. Damn Americans.

From Bath we drove cross-country to Canterbury, home of the famous Canterbury Tales written by Geoffrey Chaucer in 1475, which none of us have read. In Canterbury we met Errol, a former Mongol Rallier and car expert who set out to make the Auto Goulet Rally ready. Errol installed a sump guard on the bottom of our car to protect our engine from rocks, an inverter which we can use to charge our electronics, and some high beam off-roading lights for dark nights in the Gobi desert. He had also offered to install a roof rack for us to store our spare tires and extra gas canisters, but it turned out impossible on our two door car. We were all stumped on this one.

Then came our first taste of Rally magic. Fortunately for us, across from Errol’s workshop was a metal shop owned by the team of All Things Metal. They saw our problem and set their minds to it. Down the street they found a massive metal cage holding a huge plastic tank filled with silicon. Being quite handy, they cut the cage in half, drilled holes in the Auto Goulet, and secured that baby to the roof of our car. We’ve now doubled the space of our car and look like true Ralliers.

The Auto Goulet drove away from that workshop transformed. Like the Optimus Prime of Nissan Micras. Optimus Goulet. Yeah.

And now we are in London, in a trendy flat in Brixton. Over the next few days we’ll be printing out the faces of those who have donated $200+ to the cause, getting our spare tires, and teaching Eric how to drive.

————–
If you haven’t donated, please donate now at www.igg.me/at/globalgoulets . Every little bit helps.

2 thoughts on “Goulet in the UK”